A few more J-plugs have appeared in the San Francisco Bay Area, tho I challenge you to find out where they are. They are not listed on the DOE funded charge station project sites. Not on ChargePoint America/Coulomb's charge station map. Nor on The EV Project/Ecotality's map.
I did find one of the three on recargo.com, one of a number of outfits aggregating charge station locations. Good for them. And one on Google's map.
The units I found quite accidentally are Free Juice Bar dual-connector units. Free Juice Bar, as the name implies, dispenses electricity to cars without networks to join, credit cards to wave, or phone calls to release the precious, if not dear, electrons. Charge cars, not people is their stated philosophy. 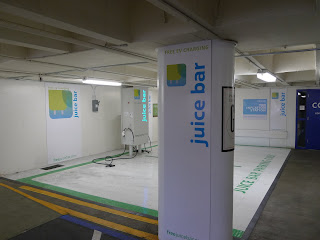 Now of course these days free doesn't necessarily mean free. These three charge stations are located in places you'll have to pay to park your car. And probably not cheap. There's a carpark at touristy Beach and Hyde; the Park 55 Hotel downtown; and the Expresso long term parking near the Oakland Airport that could run $15/day for the valet service. But it could just as easily be a shopping mall, a municipal lot or employee parking.
The notion here is that once a business buys and installs a charge station, the running costs (electricity) are too low to give much value to the operational complexities and expense of participating in and paying for a "network". The opportunity to gain some "green cred" for your hotel or shopping mall or parking lot company might be all that's required to make the sale. At first glance the cha-ching of a revenue stream of EV drivers charging up is enticing to the host, but it may take an awful lot of $2 charges to be significant or even earn back the ongoing charges to remain in the network once the DOE grant contribution disappears. 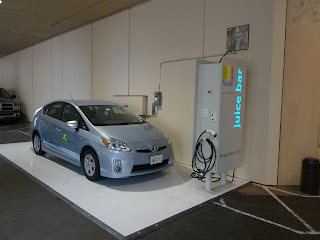 I'm obviously not sure how this will all play out, but there is more than one way to skin a cat.
A side note about infrastructure. Lots of mistakes will be made as public infrastructure is deployed. Charge stations will appear where cars don't. Bad siting or signage will lead to empty or ICEd spaces. And 240V charge stations will appear where 120V outlets would suffice. I've publicly pondered when the first J-plug would appear at an airport long-term parking lot, as there would seem to be little benefit to charging faster if the car is sitting for one or more days. If you're parking in a long term lot, your Tesla will fill up at 120V before you return.
So for all that I like about the Free Juice Bar business model, this is one case where they are not a model to follow. While I suspect the Expresso charge station has the "added value" of Valet Service, I'd rather see a wall of 120V outlets at half the cost. At least this charge station wasn't paid for with public funds.
Posted by Marc Geller at 5:48 PM

Honestly, i did not understand a thing on how this will work. I don't know why though.

Yes, you read it right. The GTA 5 APK file is available to download. There is no special requirement to download GTA 5 apk for Android Full APK free.