A oil spill has been detected, and another explosion occurred, at Japan's crippled Fukushima nuclear plant, here.
How Japan uses public works projects, including gyms and swimming pools, to buy acquiescence for its nuclear projects, here.
Posted by Marc Geller at 6:38 AM No comments: 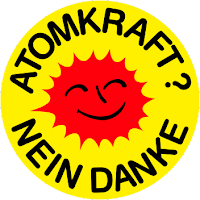 Germany calls it quits on nuclear power.
Last plant to close in 2022.
Today about 25% of Germany's electricity comes from nukes.
The U.S. gets just under 20% of its electricity from nuclear.
Posted by Marc Geller at 2:06 PM No comments:

It seems in Foxland if Obama didn't cause the problem, George Bush found the solution. Check out "George W. Bush -- Father of the Modern Electric Car?"

ClipperCreek, an Auburn, CA based manufacturer of electric vehicle charging equipment, has just announced the shipment of its 5,000th unit. Some of those units are being paid for by a California Energy Commission grant to upgrade existing Avcon charging stations across California.
Seventeen Avcons eligible for replacement are located at San Francisco city-owned parking lots. With the city budget constrained just as investment in EV charging infrastructure has become warranted, one would think the City would jump at the opportunity for seventeen n0-cost new units to serve LEAFs, Volts and Teslas now. These ClipperCreek chargers would be simple to use - just park and plug in. No card to swipe, no phone call to make, no network to join. Just as they have been for over ten years. 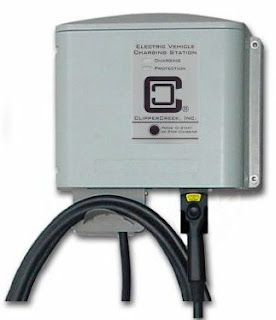 Instead, the Department of the Environment has opted to utilize a federal grant to Coulomb Technologies' ChargePoint America to pay to upgrade these charge stations. What's the problem? The CEC grant is restricted to the replacement of legacy units. $50,000 to $100,000 was left on the table. The Coulomb grant could have been utilized anywhere. The City has sacrificed early expansion of charging beyond the downtown core which today contains the lion's share of the charging stations.
There were undoubtedly considerations beyond the mere efficient use of available public resources involved in the choice made. Coulomb touts the sophisticated capabilities of its "networked," revenue-producing solution, but it is only one of numerous business models for EV public charging. With the ClipperCreek/CEC chargers, for example, the City wouldn't be on the hook for ongoing networking charges with Coulomb once the federal grant runs dry in a year or two. Will there be enough usage of a pay-to-charge statioin to justify the annual fee to Coulomb?
Once there are enough cars and enough public infrastructure, we'll begin to understand what will best serve drivers and the development of useful public charging at appropriate charging levels. Might be a monetized, networked system. Might look quite different. The ubiquity of electricity offers many options if the playing field stays level. Consumers will decide.
It seems obvious to me that government ought not prematurely buy into a "business plan" when we mean to buy charging stations. Especially when the opportunity presents itself at no cost to the City and greater simplicity of use for consumers.
Posted by Marc Geller at 6:35 AM No comments:

iMievs do their bit in Japan

Mitsubishi iMievs have played a roll in the petroleum deprived region around Fukushima. New York Times Wheels blog has the story. The picture tells the story. 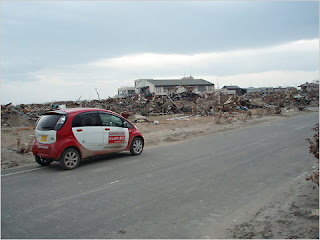 Posted by Marc Geller at 5:21 PM No comments: