It's official, the Cadillac Converj is to be the second extended-range electric vehicle after the Volt. I may be most interested affordable electric cars, but this makes sense to me. I only wish GM had the smarts back in the day to have rebranded the EV1 as a Caddy and continued limited run production.

Volvo might be getting serious about EVs. They showed a prototype Electric C30. The car was described by EV Goddess Chelsea Sexton as

"überpragmatic." An electric offering could be fit nicely into the historical perceptions of the benefits of the brand.

Coulomb is getting ready to enter the Level III charging arena. Commonly dubbed a "fast charge," Level III is higher voltage and a considerable investment, around $60,000 (including installation) for their 480-volt, 125-amp offering. With the DOE investment in some fast chargers as part of infrastructure development

in the five Nissan/Etec Leaf target regions, Level III is happening faster than might have been expected.

Fast charging will extend the range of pure EVs when deployed by freeways. More importantly, it is one of the ways to make EVs accessible to those without access to power where they park in urban centers. Whether there is a business model to make this successful remains an open question. The first Level III chargers deployed by Etec will offer free juice. I'd like to see a ten year commitment to free charging, underwritten by participating automakers and government. 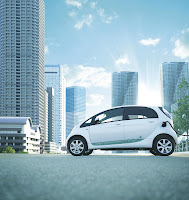 Mitsubishi is doubling down on the iMiev. Demand is outstripping the supply for the electric jellybean. Almost 2000 were delivered to corporate customers in Japan last year. Production targets have been upped to 8500 units for 2010. By 2013 they intend to make 30,000 units annually. The really good news is they have a target price of about $22,000 after the production hike. I suspect they'll find plenty of government and corporate buyers at the early higher price point as they strive to project greenness and meet emission targets.

[Source: Autobloggreen.com]
Posted by Marc Geller at 8:15 AM 3 comments: