"An oil spill in the North Sea is estimated to amount to several hundred tonnes, making it the biggest such leak in more than a decade, according to UK Government figures."


"...the energy firm is still trying to "completely halt" any further leakage."

What's the matter with Costco?

Costco, the big box retailer, has for over a decade been the business with more electric vehicle charge stations in more places around California than any other. Put in service during California's Zero Emission Mandate between 1997 and 2003 when about 6000 EVs roamed the streets, these charge stations have continued supplying power to the RAV4 EVs and other electric vehicles saved by Plug In America when it was known as DontCrush.com, a struggle chronicled in the film Who Killed the Electric Car. Costco's own magazine proudly reported in 2006, just as the film was being released, that 64 stores had a total of 90 charge stations.

Now, Costco has the opportunity, thanks to the California Energy Commission's ReConnect California program with ClipperCreek, to upgrade legacy AVCON charging equipment to J1772 at no cost. As I see it, Costco's noteworthy and foresightful participation in California's earlier electric vehicle program will give them a deserved leg up on all the national retailers now looking into providing electric vehicle charging stations for their customers. While their competition is trenching through concrete and striking costly deals with new businesses long on promises but short on experience, at Costcos a quick swap-out could quickly give them the opportunity to tout the most extensive retail network of EV charging stations. 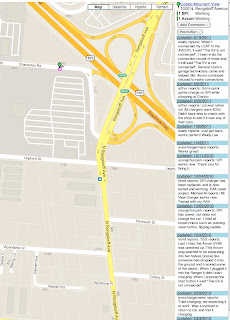 It seems, however, that Costco has chosen to look this gift horse in the mouth. The company has refused to consider the CEC grant to upgrade their charge stations for free. And it has actually begun to take out the chargers that it has, despite the fact that they have been used a lot by their own customers. Just take a look at an evchargermaps.com entry for a Costco with chargers. For example, the Mountain View location, a place I've charged and shopped at a few times a year since 2004. It has 44 reports going back to 2008. And dozens more going back to 2003. (This doesn't include every time someone charged, merely the times a driver made the effort to confirm the condition of the charger for other drivers.)

It has been reported that some store managers would rather not be removing chargers right when we see plug-in cars coming to market. Providing charging fits well with the company's sustainability efforts, including both the physical stores and the products they sell.  President and CEO Jim Sinegal touts Costco as "one of the early companies to embrace many of the earth-friendly technologies, such as skylights and recycling" in it's Corporate Sustainability Report from 2009.

Why Costco isn't embracing their early support for plug-in cars now that the rest of the world is jumping in is beyond me. Given that it will actually cost the company more money to say no than to say yes makes this a no-brainer for me. It should for Costco as well.