How Ford got back in the EV game 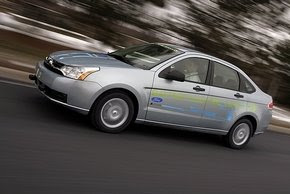 Ford has done it's share of electric cars, including the Ranger EV and Th!nk City that were its ZEV mandate cars in the '90s. The #2 US automaker has made a few plug-in hybrid Escape Hybrids that have been in a test fleet at Southern California Edison for about 18 months. Plans for a 2012 general release of the PHEV Escape did not wow anyone. Still no firm numbers, nor irrevocable commitment. Electrification, a buzz-word at rival GM, didn't appear to be gaining much headway in Dearborn.

Of course Ford needed some plan to deal with last year's high gas prices. The surprise appearance at the Detroit Auto Show last month of an electric Focus may be evidence of a new day (again) at Ford. As reported in today's Detroit News story Ford's electric car project charges ahead, Canadian supplier Magna International surprised the American automakers by quickly producing an electric Focus on their own dime and driving to Ford's front door last September.

As with the BMW MINI E, what is stunning, if not surprising, is how quickly a decent fully electric vehicle can be put on the road. While GM takes the time to make a ground-up new PHEV vehicle, Ford and others could get the EV show on the road more quickly using existing platforms. All eyes are fixed on 2011.

Of course all this electric car hoo-ha bubbled back to the surface with last year's gas prices, now receded. I can't help thinking the electric boom we saw in Detroit last month was the result of plans laid half a year earlier, when even millionaire OEM executives were aware of, if not afflicted by, $100 fill-ups (when they weren't flying around in the corporate jets.) The likelihood of somewhat tighter emissions standards nationwide with the arrival of Team Obama has meant automotive alternatives aren't completely off the automakers' table for now. But the economic crisis could end up a lost opportunity to begin the needed shift to plug-in cars. If Team Obama is convinced it's more important for Detroit to just sell cars, than sell the right cars, we could lose yet another decade. As the article rightly mentions, there is a great upside for the automakers to sell some electric cars. "Building electric vehicles gets the emissions monster off their backs, and it also helps their fleet fuel economy average in a big way," according to skeptical industry analysit Jim Hall.

Lisa Drake, Ford's chief engineer for hybrid programs was extremely impressed with the electric focus Magna dropped off. But there's a hint of the possibility of delay.

High gas prices or not, neither the industry nor the environment nor consumers can wait for "next time."
Posted by Marc Geller at 8:17 AM 3 comments: