Sen. Barbara Boxer attended a Silicon Valley Alternative Energy Summit today and PG&E was there with its plug-in hybrid Prius. 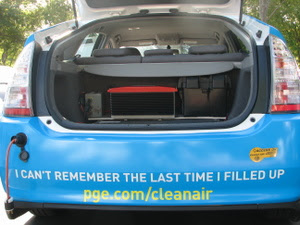 Green Wombat reports on the Vehicle to Grid (V2G) capability demonstrated by PG&E.

The modified Toyota Prius was plugged into a into a standard PG&E meter outside Advanced Micro Devices's Sunnyvale headquarters. As the car's lithium ion battery powered a bank of lights and a portable heater, the meter began to run backwards.

Add some solar panels to the mix and you've got the makings of a comprehensive policy: prioritize renewable electricity, plug-in cars and V2G. I hope Sen. Boxer had an epiphany.
Posted by Marc Geller at 4:11 PM 14 comments: