Changing of the guard at the auto makers' industry group the Alliance of Automobile Manufacturers (AAM). Former Democratic Congressman Dave McCurdy takes his lobbying skills from Electronics to Autos. As reported at the Washington Note, just seeing a Democrat in this top spot once held by Andy Card, who went on to become Bush's Chief of Staff, is a positive sign of the times. Still, this is the industry group (and its predecessor) that has opposed every attempt at auto sanity passed by the people's representatives - from seat belts to the ZEV Mandate to the California Greenhouse Gas bill. No reason to believe that stance will change. 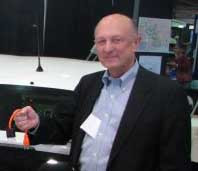 But with change in personnel comes change in personal networks. As Steven Clemons points out in his report, McCurdy and Clinton's CIA chief Jim Woolsey, two guys from Oklahoma, go way back. Woolsey is one of the higher profile advocates for plug-in cars. Woolsey's gasoline-only Prius has a "Bin Laden Hates My Car" sticker, but he knows the only way to cut the cord in the near term is cars with an electrical plug. (Woolsey, pictured right, holding the plug for Felix Kramer's Plug-in Prius.) See his presentation at the Santa Monica AltFuel Auto Show below this post.

Here's to hoping Woolsey and McCurdy sit down for a nice lunch real soon. Perhaps their relationship can help break down the wall the auto industry has constructed to postpone the inevitable, electric future for cars.