Hybrid Fans to Toyota: The Next Step is Plug-in Hybrids 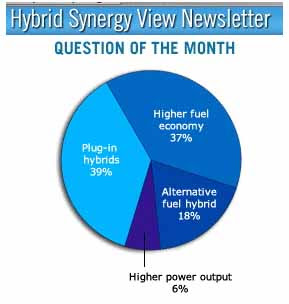 This year Toyota makes its SUVs and trucks even larger. Toyota increasingly devotes precious energy contained in hybrid batteries charged with expensive gasoline to higher power output rather than efficiency. What do people actually want? Toyota's own "Question of the Month" in the Hybrid Synergy View Newsletter, asked.

The desire of 94% would be fulfilled by a plug-in hybrid.

To Toyota's credit, they published the results. To it's discredit, they seem dedicated to being second and probably best with plug-ins.

(Hat Tip to Felix Kramer at the Electric Auto Association Annual Meeting in Palo Alto, CA this past Saturday.)
Posted by Marc Geller at 11:28 PM No comments: