It's official - Think to set up shop in Indiana 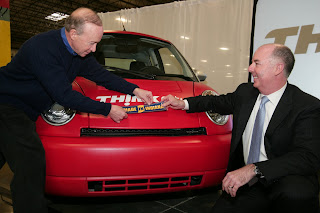 Th!nk CEO Richard Canny and Indiana Governor Mitch Daniels slapped a "Made In Indiana" sticker on a Th!nk City this morning in Elkhart. According to Th!ink's press release, cars will begin to be sold stateside before the end of the year, although US assembly won't begin until 2011. Getting cars into the hands of consumers in a way that gets noticed sooner rather than later will be essential if the brand is establish itself here.

The company has announced its intention to invest $43 million in the Elkhart facility, and has been offered $3 million in tax credits and a small job training grant by Indiana. Th!nk has an active application before the US DOE under the $25-billion Advanced Technology Vehicle Manufacturing loan program that has benefitted Tesla and Fisker. A lot may hinge on that application.
Posted by Marc Geller at 3:59 PM 3 comments: