The trials of public charging, part 2 (of many to come)

I wrote back in December about my unhappy experience attempting to charge my loaner LEAF at San Francisco City Hall's electric car charging stations. Parking in these Coulomb charge stations is restricted to city-owned vehicles and Car Share companies under threat of towing. A threat taken seriously in San Francisco.
I wrangled a few hours of charging back in December from Bob Hayden, the SF Department of the Environment's EV Czar. And I wrangled time again while Tom Dowling and I met more recently with Bob at the SFDOE (this time to charge my own, recently delivered LEAF.)
But one shouldn't have to know Bob to plug in your new car. It's city, state and federal policy to enable electric cars for the emissions and petroleum reduction they provide. I'd hoped the City would find a way to open up the opportunity for the people beginning to obtain plug-in cars to more freely use these rare, public charge stations. Publicly plugging in is an act of coming out, of civic responsibility. Plugging in to public charge stations is part of the process of introducing Americans to electric cars.
Unfortunately there are still damn few J-plugs (the new standard for plug-in cars) publicly deployed, despite the expectations created by the federal grants to the EVProject (Ecotality) and ChargePoint America (Coulomb) and ex-Mayor Newsom here in San Francisco. The situation is similarly bleak in Southern California. And the fact is that the cars, however slowly, are being delivered. San Francisco's Department of the Environment just received its first LEAF, which now uses one of these spaces. It sits over the weekend, long since fully charged, demonstrating the city's greenness, I suppose, while preventing anyone from using the charge station. Making one spot available over the weekend would be one way to demonstrate a commitment to public access to this publicly funded infrastructure. 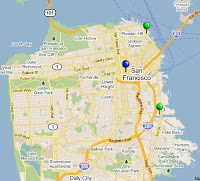 Here in San Francisco there are three sites (6 J-plugs) listed on Coulomb's/ChargePoint America's/MyChargePoint.net website, including the three at City Hall. At one you pay for parking and for plugging in, one is free, and one is restricted. In fact, there is another pair of J-plugs I know of in the Hilton's garage on Kearny St., but since they aren't Coulomb product, they aren't listed. Problem #1, Who's going to aggregate this information to be useful for drivers?
Problem #2: It needs to be noted (especially by new drivers) that the electrons don't just flow from many of these public J-plugs when you plug into the car as they do for the previous generation - EV1s and RAV4 EVs. They need to be activated with a phone call, a Coulomb card (one-time $10 per card), or in some cases a credit card. For a while, the electricity will be free with a phone call or Coulomb card, but eventually - probably sooner rather than later - there will be a cost to charge at many charge stations.
There is a cost to charging. Take that every way it can be taken. What I want to focus on is the unintended consequences of near-term monetization of public charging. Only half the story about public charging is providing juice: enabling drivers to extend the range of their vehicles beyond their night-time "fill-up" at home when necessary and overcoming newbie "range anxiety." The other half, for the next five years or so, is outreach and education. An opportunity to demonstrate to the 99+% who have no experience with plug-in cars that the cars are real. "There one is," says Mr. Jones to Mrs. Jones as they walk pass one plugged in at the shopping mall. And if the Joneses ever wondered about electric cars, they just might get to ask the owner some questions.
Monetize that charge station during the first few years the cars are appearing, and we lose 90% of the opportunities to talk with Mr. and Mrs. Jones. Here's what's going to happen: You get your new LEAF or Volt. A charge station appears at the grocery store you frequent. You plug it in, but nothing happens. You see the credit card symbols. If you happen to have a chip-enabled credit card (I have no idea how prevalent they are), you wave it. Juice flows. A small crowd gathers. You answer questions about the car. This is exciting. But after getting the monthly bill, you decide to forgo the recurring $2 charge for 50 cents of electricity you didn't need anyway. And maybe you'd begun to tire just a little of the attention.
Now that your new plug-in car is parked discretely with the gas burners, what happens to the charge station? It waits patiently for someone to really need it. And everyone entering the store passes the empty space, the "charger" standing sentry inconveniencing the "real" cars while suggesting government waste on another failed project.

Near-term monetization also threatens needed expansion of charging infrastructure, as the early installations become underutilized. It is already ironic enough that the two companies pushing monetization as the necessary component for a successful rollout of public charging infrastructure have taken the lion’s share of the public funding in order to develop their “free market” solution. It would be doubly ironic if low usage caused by early monetization resulted in insignificant amounts of revenue suggesting a poorer profitability picture than projected creating an impediment to necessary further expansion of both public charging stations and their own business.

The federal funding should have come with strings attached. For a certain period, say two to five years, the electricity should just flow. No connecting to a network, no payment. The host - the city parking garage or shopping mall - would agree to cover the cost of electricity in exchange for the charging unit and all the green cred and good will they can muster. After a few years, with lots of experience, let the hosts decide if they want to monetize. At that point hopefully there will be enough plug-in cars around that they will no longer be a novelty needing explaining, and we will actually want to discourage purely opportunistic public charging to ensure their availability when someone really needs the juice. At that point, we'll all be willing to pay.

But if PlugShare catches on, we may not have to.

After nearly a decade of mismanagement, theft and fraud, the U.S. military still hasn't found a way to staunch the flow of what is likely hundreds of millions -- if not billions -- of dollars in lost fuel in Afghanistan, some of which is sold on the black market and winds up in Taliban hands, a TPM investigation has found.