"When money flows from the ocean floor"

In January 2007 it was reported from Davos that Shimon Peres was in talks to bring an electric car factory to Israel. I wrote:

The beginnings of Better Place, of course. Also, one could hope, the beginning of the transformation of Israel from a vulnerable fossil-fuel deficient and dependent nation into a 21st century renewable energy beacon.

Now it seems the discovery of natural gas off the coast may have moved Israel's eye off the prize.

"The beautiful vision evaporated in the bureaucratic grinders, and the prime minister fell into the very trap against which he had warned. When money flows from the ocean floor, who has time to think about correcting the world?"

At EnerDel's Indiana battery plant today, VP Biden outlined the administration's EV strategy. The Obama administration is calling for raising the number of plug-ins that qualify for federal incentives from 200,000 to 500,000 cars per manufacturer. In addition, Obama is looking to convert the federal tax credit into a rebate available at the time of sale. More here.

[Source: Detroit News]
Posted by Marc Geller at 9:59 AM 2 comments:

While governments scrape together money to roll out a public charging infrastructure for the plug-in cars that are already being delivered to customers, Mercedes is pleading for more money to enable hydrogen fuel cell vehicles they have failed to deliver for a decade.

LEAFs arriving by the truckload

LEAFs are beginning to arrive by the truckload. Seven drove in to a SoCal dealership this morning. 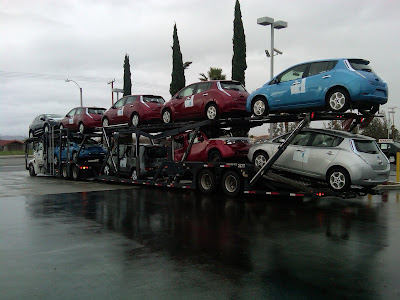