Shanghai: Amidst the clamor, many glide by silently on two wheels

Shanghai is a mind blower.

Exuberant, flashy skyscrapers dot the landscape soaring above the city's overhead freeways, many claiming their place in the skyline with decorative, synchronized light shows. Immense shopping malls with every major international brand represented are packed with locals out merely for a stroll, the newly rich dressed to the nines toting Cartier bags, and tourists alike.

Down at street level, boulevards and alleys are stuffed to the gills. Cars, most of recent vintage (including BMWs and Mercedes) compete with busses (some electric) and trucks, as well as

innumerable scooters, and bikes in crazy disrespect for both the modern traffic control systems and pedestrians negotiating their way amidst the traffic.

It's the hubbub of noise and smog that comes with fast-paced, well-funded economic development.

Yet almost undetectable amidst the cacophony, most of those ubiquitous two-wheelers are electric. When you find yourself on a less trafficked street it becomes apparent as e-bikes loaded with boxes obscuring the vehicle itself, and young people on scooters, cruise by inaudibly. Old and young, male and female, manual worker and office worker, they slink,drift and dart about silently. Then a gas scooter destroys the relative tranquility leaving a stink in its wake.

of the week selling the $300 electric two-wheelers. One sees them parked everywhere, but I've yet to see one charging, except at the store. There's no public charging, but that clearly hasn't hampered their adoption. Not only by local consumers, but also the local government. I've seen small electric police vehicles and trash collectors. 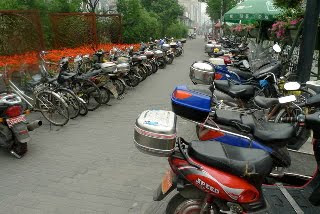 The Chinese government is putting serious money behind this electric transportation revolution, recently announcing an $8000 subsidy for electric cars and investments in public charging infrastructure. To complement the modern, clean and extensive electric Metro system, hopefully they will also expand the legacy electric bus network still at work in Shanghai, a system San Francisco maintained as most American cities pre-maturely abandoned this generations-old zero-emission transit technology.

With recycling bins and advertisements for wind power, the ubiquitous electric two-wheelers, and

investments in electric cars, maglevs and bullet trains, there is awareness among the Chinese leadership of sustainability issues amidst the impenetrable, insufferable smog of Shanghai's economic development. They have a long way to go, but steps are being taken. 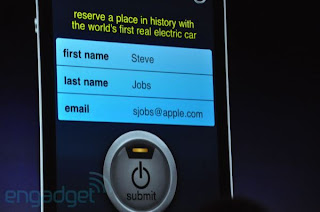 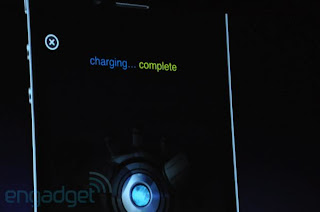 Steve Jobs just showed off the Nissan LEAF on the new iPhone at Apple's Developer's Conference in San Francisco.

He displayed the ad Nissan will be running for LEAF on Apple's new iAd platform.

And then he ordered a car with via the ad.

Check out a couple of images from Engadget.com
Posted by Marc Geller at 11:40 AM 5 comments: