The first consumer with a Mini E lease, Peter Trepp, was interviewed on CNBC. The vroom- obsessed anchor concludes with an erroneous and unprofessional "gotcha" about coal. The report exudes such bias, you may want to let CNBC know how you feel here.

Secretary Chu may have acted on the science, but the Terminator hasn't gotten the termination memo.

Reporter: Are you satisfied with the number of hydrogen stations and vehicles we have today?

Schwarzenegger: I wouldn't be here if I was. I'm hungry! I want more cars, more stations, and not just in California. I think Washington has to get with it. . . We will find the partners and we will build the stations. We always march forwards.

In Norway, the effort to find a means to get financing so Th!nk can fulfill existing orders for thousands of vehicles took to the streets on Tuesday. A 50-electric car parade took the issue right to the Trade and Industry Department in downtown Oslo. A concrete proposal for a Guarantee Institute for Electric Vehicles was presented to the government.

ElectricAid, Norstart and Bellona, along with politicians from the left and the right and the Green Party, Greenpeace and the Norwegian Environmental Union demonstrated support for a loan guarantee program. An answer should be forthcoming shortly.

They broke it, we own it

Looks like GM's imminent bankruptcy will result in the US government holding a 70% stake.

Peter Trepp in Southern California is the first consumer to take delivery of their electric Mini. The USA Today story begins:

"Peter Trepp just can't keep his foot off the accelerator of his new Mini E."

Peter blogs about his electric Mini at www.petersminie.blogspot.com/. 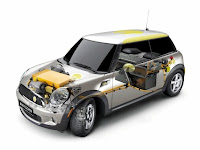 Toyota spokesman on PHEVs at EVS

You can smell the PHEV procrastination. Asked by the reporter when the plug-in Prius on display will be available in Norway, he replies:

"This is the first demonstration program. We have a small number of vehicles in Paris, France and in the UK and we're involved in gathering some data to understand how consumers actually use these vehicles...We will start much bigger scale demonstration... 100 vehicles in Strassbourg, and it's intended a 3 year trial to understand how consumers react, how they use the vehicle, to gather information and this will enable us to decide the best way to configure the vehicle and then we can make decisions about marketing. No decision about introduction of plug-in hybrid vehicle. The whole reason is we have to do the trial to better understand consumer requirements..."

Sounding a lot like Joe Romm in Who Killed the Electric Car.

TR: The hydrogen fuel-cell program has been scaled back in the proposed budget, and the emphasis has been changed from transportation to buildings.

TR: It used to be thought, five to eight years ago, that hydrogen was the great answer for the future of transportation. The mood has shifted. What have we learned from this?

SC: I think, well, among some people it hasn't really shifted [laughs]. I think there was great enthusiasm in some quarters, but I always was somewhat skeptical of it because, right now, the way we get hydrogen primarily is from reforming [natural] gas. That's not an ideal source of hydrogen. You're giving away some of the energy content of natural gas, which is a very valuable fuel. So that's one problem. The other problem is, if it's for transportation, we don't have a good storage mechanism yet. Compressed hydrogen is the best mechanism [but it requires] a large volume. We haven't figured out how to store it with high density. What else? The fuel cells aren't there yet, and the distribution infrastructure isn't there yet. So you have four things that have to happen all at once. And so it always looked like it was going to be [a technology for] the distant future. In order to get significant deployment, you need four significant technological breakthroughs. That makes it unlikely.

From an interview with Kevin Bullis of Technology Review, here.
Posted by Marc Geller at 8:00 AM 4 comments: 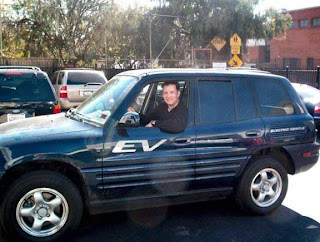 Minneapolis will be getting 18 electric cars from Ford, and stimulus funding will be used to install charging points, as reported in the Twin Cities downtownjournal.com
Posted by Marc Geller at 8:10 AM 1 comment:

Electric Minis only weeks away from delivery

Four hundred fifty electric Minis will hit the road in the next few weeks in California, New York and New Jersey. The leasees, who will have the car for one year, are chomping at the bit. Bill Nye the science guy will put aside his gas-guzzling Prius for twelve months. Ex-EV1 drivers will be among those taking advantage of their first opportunity to get back in an electric car. Ken Bensinger reports on a gathering in LA.
Posted by Marc Geller at 7:11 AM 3 comments:

Cars powered by hydrogen fuel cells, once hailed by President George W. Bush as a pollution-free solution for reducing the nation’s dependence on foreign oil, will not be practical over the next 10 to 20 years, the energy secretary said Thursday, and the government will cut off funds for the vehicles’ development.

It's about time. Gotta wonder what they're thinking about their pet project now in Sacramento. California does seems determined to be the last supporter of hydrogen and fuel cells left standing. There's still time to reallocate AB118 money being flushed away on a few hydrogen stations. CEC, CARB, anyone listening?

Source: NY Times
Posted by Marc Geller at 3:19 AM 4 comments:

It has been suggested before that it just might be more efficient to turn crops into electricity than biofuel, and here's a study that proves that to be the case.

According to the study co-sponsored by the Carnegie Institution for Science, "Bioelectricity was the clear winner in the transportation-miles-per-acre comparison, regardless of whether the energy was produced from corn or from switchgrass, a cellulose-based energy crop. "

And it's all here in this cool graphic. Click it to see it larger.

“I had a surprising call this week,” the author Richard North Patterson told the audience that had gathered last weekend as part of the PEN World Voices Festival of International Literature. It was former President Bill Clinton. Mr. Patterson’s new novel, “Eclipse,” is based on the case of the Nigerian writer and activist Ken Saro-Wiwa, and Mr. Clinton spoke of a phone call he had made 14 years ago to Gen. Sani Abacha of Nigeria, asking him to spare Mr. Saro-Wiwa from the hangman.

Mr. Clinton said General Abacha “was very polite,” but “he was cold,” Mr. Patterson related. “Clinton took away from that, among other things, that oil and the need for oil on behalf of the West and other places made Abacha, in his mind, impervious.”

The event’s moderator, the Nigerian novelist Okey Ndibe, added an unexpected epilogue. A friend in the Abacha cabinet said the general later boasted: “All these pro-democracy activists run to America and expect America to save them. But the U.S. president himself is calling me ‘sir.’ He is scared of me.”