The expense and impracticality of hydrogen fuel cell powered cars is beginning to dawn on the major automakers. Batteries will do within a few short years what H2 advocates can only dream. The Wall Street Journal reports GM, Toyota Doubtful on Fuel Cells' Mass Use.

Top executives from General Motors Corp. and Toyota Motor Corp. Tuesday expressed doubts about the viability of hydrogen fuel cells for mass-market production in the near term and suggested their companies are now betting that electric cars will prove to be a better way to reduce fuel consumption and cut tailpipe emissions on a large scale.

Further evidence that the action is in electric cars and the batteries that will energize them: 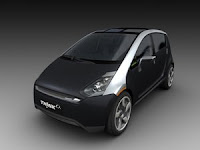 General Electric has invested $4 million in Th!nk Global, and $20 million in A123. Business Week reports GE plugs into electric car investments. And Th!nk has debuted a larger concept car, which it has developed with an unnamed major automaker. Green Wombat has more info here.

Pretty soon it might be down to BMW and Honda advertising the dream, with the California Air Resources Board acting as enabler. CARB staff is recommending lowering once again the required number of zero emission vehicles - this time by a mere 90%! Honda, the supposed H2 true believer, is actually given an incentive to produce fewer of its much touted Clarity FCV.

The Air Resources Board could probably find a way to lead by prodding early commercialization of battery ZEVs, but instead it appears to be regulating itself into irrelevancy.
Posted by Marc Geller at 10:27 AM 3 comments: