It's one thing to read about a Prius powering a home during a blackout.

Check out this video showing an unexpected benefit to the torc, power and design of the Tango electric car.

Just a the coal companies go on the air with ads that could be Obama campaign commercials, down to the Yes We Can (make coal clean,) the real world intrudes.
Posted by Marc Geller at 1:06 AM 1 comment:

A bit more information today on Toyota's small EV. The message, from spokeswoman Jana Hartline, is don't expect more information. There will be no press conference devoted to the vehicle at the Detroit Auto Show, where it will simply be displayed.

“It’s a concept we are bringing to the show basically to confirm our interest in electric vehicles,” Hartline told the Detroit Free Press.

Toyota to display a concept EV

The press release couldn't be shorter.

It's hard not to be snarky. Toyota will display a concept EV! My six year old Toyota RAV4 EV electric car continues to perform flawlessly and gaslessly.

Toyota could provide global leadership today with plug-in cars. They've had the technology for over a decade. Instead they seem determined to let others be first.

Meanwhile Toyota will continue to sell only petroleum burning cars. Still, even Toyota is facing hard times. It is reporting its first loss in 70 years. Almost $2 billion.
Posted by Marc Geller at 9:40 AM No comments:

Obama's choice for Secretary of Energy, Steven Chu, apparently can't be faulted for his dedication to dealing with climate change. Praise for the nomination ranges from Greenpeace to the Union of Concerned Scientists.

But in a cabinet filled with ethanol boosters, his coziness with corporate sponsors of biofuels research makes me wonder what solutions to the climate crisis will get top priority, and top dollar after January 20th. Chu's biggest "get" was half a billion dollars from BP for biofuels research at UC Berkeley. Is Steven Chu BFF With BP? in Mother Jones magazine recounts his story and raises questions:

"Chu's role in creating the Energy Biosciences Institute may inform his approach to governing the Department of Energy, a major governmental underwriter of research, and one that will face pressure to partner with corporations in pursuing technological solutions to climate change. As the incoming Obama administration prepares to spend liberally to develop cleaner sources of energy, the structure of corporate-government partnerships will determine how the profits of that research return to taxpayers, and how rigorously scientists evaluate the downsides of controversial technologies such as biofuels."

Corporate sponsors have an outsized influence on universities these days. UC has done lots of work on fuel cells because the auto makers came up with the dough. UC is doing consumer studies today that exclude battery electric cars but include hybrids and fuel cell vehicles. Can you spell Toyota? Berkeley will do lots of biofuels research because BP came up with the money.

Bush threw one billion dollars at hydrogen and fuel cells. Industry and universities have been feeding at the trough, but actual contributions to reducing global warming or petroleum dependence have been less than negligible.

Just when it seemed the overhyped promise of biofuels was diminishing, it may prove to have a second life under Obama.

Plug-in advocates are going to have our work cut out for us.
Posted by Marc Geller at 8:32 PM 4 comments:

Obama's cabinet is looking very friendly toward ethanol, The Hill reports. Vilsack from Iowa at Agriculture, Salazar from Colorado at Interior, Daschle from South Dakota at HHS and likely Transportation nominee Ray LaHood are all big ethanol boosters. Chu at Energy, while critical of corn ethanol, has been an advocate for cellulosic.

I can't help but wonder who will be sitting at the table who understands and believes in transportation electrification. Will "flex-fuel" once again subvert the necessary transformation of the American auto industry?
Posted by Marc Geller at 11:46 PM 2 comments: 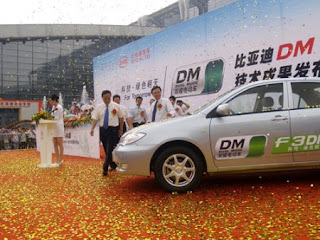 Shares rose about 15% on the Hong Kong stock exchange Monday. Earlier this year Warren Buffet invested over $200 million in the company (10% share). As most automakers plan for lower sales in 2009, BYD plans to double its sales to 350,000 units, including 10,000 plug-in hybrids. BYD intends to have cars on the road in the US within two years. Including an all-electric car.

As the automakers attempt to negotiate the uncertainties of the current economic environment, could it be the Chinese who bring plug-ins to the masses?
Posted by Marc Geller at 7:59 AM No comments:

Think Global, the Norwegian electric car maker, has halted production of its electric City car, generating fears of a possible bankruptcy. As reported by Reuters, "Like many other car companies, privately-held Think said it had difficulties in obtaining working capital and that automotive suppliers offered tougher terms on parts." It has asked the Norwegian government for $100-200 million to see it through the crisis.
Posted by Marc Geller at 11:23 AM No comments:

There's good news in Jim Motavalli's Greentech report in the NY Times about NiMH batteries in hybrids. The batteries have gotten cheaper, and they have proven robust and long-lived. Toyota reports a tiny percentage of replacements - 350 packs out of hundreds of thousands of 2nd generation Priuses. Yellow Cab in Vancouver has about 100 hybrids, some having racked up as many as 300,000 miles. Yet only 3 or 4 have been replaced, according to the company's general manager.
Posted by Marc Geller at 12:07 AM No comments:

Next month at the North American International Auto Show in Detroit, we will discuss in detail Ford’s accelerated vehicle electrification plan, which includes bringing a family of hybrids, plug-in hybrids and battery electric vehicles to market by 2012. The work will include partnering with battery and powertrain systems suppliers to deliver a full battery electric vehicle (BEV) in a van-type vehicle for commercial fleet use in 2010 and a BEV sedan in 2011. We will develop these vehicles in a manner that enables it to reduce costs and ultimately make BEVs more affordable for consumers.

Nominally, at least, the Detroit 3 are now on board.
Posted by Marc Geller at 2:19 PM No comments: 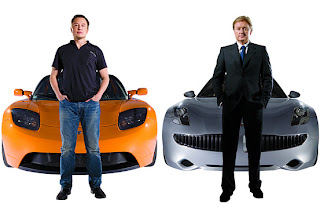 The Wall St Journal's new glossy mag, WSJ, reports on the rivalry between Tesla's Elon Musk, and Henrik Fisker. A bit of scratching and clawing.
Posted by Marc Geller at 12:32 AM No comments: