Plug In America releases another spot

Senators Coburn and DeMint have corn ethanol subsidies in their sights. The environmental case rests on a thin reed indeed. I'm hoping they succeed. Firedoglake has the story.

UPDATE: California Senator Dianne Feinstein is on board will letting the subsidies expire on December 31, 2010.

Coulomb, MasterCard, and the future of public charging

Mayor Newsom and many city employees were there, along with large signs and representatives 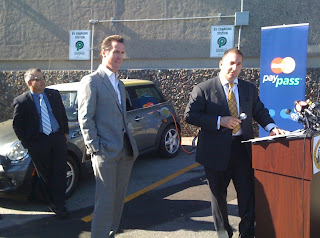 of MasterCard. MC will enable one-off charging in Coulomb charge stations with their new touchless "paypass" credit card. So if you find yourself by Pier 27 in a J1772 compliant or 120 volt-capable electric vehicle and are a Coulomb member or have one of MC's fancy new cards, two spaces with charge stations are available for the parking fee plus an as yet undetermined fee for the electricity. Richard Lowenthal, Coulomb CEO, threw out the figure of $2 for the charge, but noted the host can set the fee.

If you are a consumer, and you get a Volt, Smart, or Ford electric car, you probably qualify for a free home charge station. (Nissan LEAF buyers are excluded. Ecotality's EV Project got an exclusive.)

If you are a business in a program area, you can get the same deal - free charge stations paid for by stimulus money. And if you're located in California, the California Energy Commission portion of the grant to Coulomb will pay for installation.

As Richard Lowenthal said to me at the event: "Great deal!" Certainly. But for whom?

I want to see adequate public charging infrastructure installed in sensible locations. I think it makes sense for public resources to drive the early rollout. Time will tell what business model/s might work to provide an adequate supply and dispersal of public charge stations. But given the relatively low cost of electricity, and the large public environmental benefit, it seems premature to presume monetization or let the desire for monetization drive the placement of charge stations.

Where should publicly funded infrastructure be located, and who should decide? Is it good public policy to encourage businesses to acquire free charge stations at public expense without any commitment other than putting them in service? Should 100% of the cost be born by taxpayers if 100% of the benefit goes to private business? Should a model of host-supplied electricity (like host supplied parking or wi-fi) be given an equal chance to succeed?

In the past, in exchange for California's financial support for public charge station installation, the business hosting the charge station covered the cost of the electricity, the smallest part of the equation. EV drivers thus have simple access to electricity, allowing them to use their zero-emission vehicle to the max. The business hosting the charge stations get some "green" cred, along with hopes of attracting customers with EVs. That seems to me a fair deal between taxpayers and business, and a better way to promote the use of electric vehicles.

To be fair, Coulomb itself is officially agnostic regarding whether a station's host will charge for the electrons, but the deal with MasterCard suggests the direction they're heading.

And Coulomb is not alone. Ecototality, the other big beneficiary of public largesse (again in the tens of millions of dollars,) has made clear that its EV Project public charge stations will require payment by next May.

Some companies are pursuing a different model, selling charge stations that aren't part of a proprietary network and that don't presume to be monetized. As far as I know, Clipper Creek, 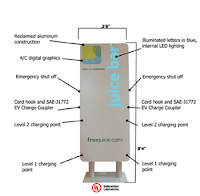 Leviton, AeroVironment and GE, for example, will be selling equipment but will not attempt to collect ongoing revenue from the delivery of electrons. Free Juice Bar explicitly sells charge stations to offer free power.

The question isn't whether drivers of plug-in cars deserve free power. Obviously not.

The only important question is what will help drive rapid adoption of plug-in vehicles. Will a monetized public charging infrastructure from the get-go promote plug-ins? Or, in fact, could we soon find monetized charge stations remain underutilized given a cost at least twice that of home charging. Resulting in empty, restricted parking spaces sparking general resentment rather than the recognition and perhaps envy we hope to engender.

The new ChargePoint America installation seems designed to illustrate my point. Why, given what we know about charge station placement, are the two Priority Parking charge stations in the most prominent, desirable spots, right at the entrance. Virtually everyone who enters this parking lot for the foreseeable future will likely pass two empty spots, reserved for apparently non-existent electric vehicles.

Public charge stations are best located where hosts have motivations greater than some small financial benefit. Businesses are looking to attract customers and show their green side, and government is seeking the emissions reduction benefit of plug-ins.

Public dollars should be used in a manner that best promotes plug-in electric vehicles and maximizes the environmental benefit in the near term. Creating an new industry that converts cheap electricity into a monetized charge session is not necessarily the best way forward.
Posted by Marc Geller at 5:02 PM 8 comments:

Better Place has just received authorization from the Minister of Transport to import 13 Renault Fluence electric cars. The cars are expected to arrive in the next few weeks.

Do you need a gas cell phone?


[Source: YouTube]
Posted by Marc Geller at 9:01 AM No comments:

Just three days after Michael Jackson, Coda Automotive's senior vice president of global sales, marketing and distribution, resigned to start his own company, the company's CEO, Kevin Czinger, is also stepping down from his position. Czinger, who has pretty much been the public face of the Miles Electric Vehicles spin-off since he joined in 2008 – and a substantial shareholder – will adopt the role of senior strategic advisor.

[Source: AutoBlogGreen]
Posted by Marc Geller at 2:45 PM No comments:

It will be next to impossible to pass comprehensive climate legislation in the next two years, but it appears Reid will focus on a series of low-hanging-fruit provisions that are popular on both sides of the aisle, including bills to incentivize electric vehicles, improve energy efficiency and weatherize homes.

[Source: Washington Independent]
Posted by Marc Geller at 10:00 AM No comments:

“It’s starting to look like there will be a market for electric vehicles,” said Takanobu Ito, the chief executive of Honda, according to Reuters. “We can’t keep shooting down their potential, and we can’t say there’s no business case for it,” Mr. Ito said at the recent event, referring to electric cars.

Honda has long been the most adamant of the automakers, refusing to consider plug-in cars, even after building the well-received EV Plus to meet the California ZEV mandate in the 90s. Of course Honda, in its heart, is an internal combustion company. It is not surprising it might find a transition to electricity even more troubling than other car companies.

[Source: NY Times Wheels blog]
Posted by Marc Geller at 10:31 AM No comments: