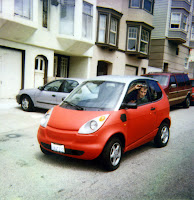 The Aftenposten reports (in English) on the success Jan Olaf Willums is having at the helm of the revived Think Global. Many of Norway's tycoons and heirs are making significant investments in the company which is planning production of as many as 10,000 cars by 2009.

My first electric car was a Think City, produced when the company was owned by Ford. This "smarter than Smart" city car was a revelation to me when I leased it in 2001. By then, every other maker of a ZEV Mandated electric car had leased all their cars and were plotting their destruction rather than making any more to meet the demand. Toyota, Honda and GM were dismantling their electric efforts, but Ford seemed to be making a last stab at a viable electric program called Think Mobility. The little car demonstrated to me that electric vehicles were ready for prime time.

Ford ultimately followed the lead of the other automakers, and began to destroy the cars in 2004. Ford had promised the cars would be returned to Norway at leases' end to be sold. Waiting lists were forming there. When California Th!nk drivers found out the cars now would be crushed, their protests revived the movement for electric cars. One such protest is documented in the film Who Killed the Electric Car? and the story is told as well in Sherry Boschert's book Plug-in Hybrids.

Nothing would please me more than seeing the Think City again on San Francisco streets.