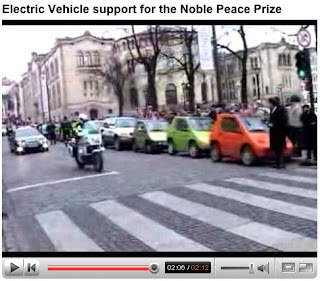 Electric cars, including many Th!nk City cars and at least one RAV4 EV, turned out in large numbers to salute Al Gore, lining Oslo streets as he drove (in a gasser) to receive the Nobel Peace Prize. (click on the photo below to see more photos thanks to ElBil Norge, click on the video image to see Youtube video.) 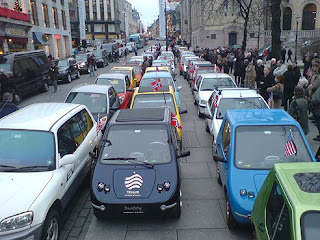 Electric car advocates know that nothing can take a bigger bite out of greenhouse gas emissions than switching from internal combustion to electric drive. Here's to hoping that Al Gore took a look out the window as he drove past. With the new solar PV on his Tennessee roof, he could do all his Carthage driving truly emitting no greenhouse gases, if, and only if, he drove an electric car. I'm hoping Governor Schwarzenegger takes the former VP and ally on global warming issues for a drive as soon as he takes delivery of his Tesla.
Posted by Marc Geller at 10:33 AM 2 comments: