To ensure effective and tough federal CAFE standards for 2017-2025, enviro groups are holding on to the California card - the state's right to set its own auto emissions standards - according to Jim Motavalli in the NY Times. Read the full story here.
[Source: NY Times]
Posted by Marc Geller at 12:36 AM 1 comment:

Think, maker of the Think City, is in trouble, Norwegian business newspaper E24 reports. It's not paid it's bills since February, according to Swedish parts supplier AQ Wiring Systems.
At the same time, sales of electric cars are booming in Norway. The iMiev has become the fastest selling car in its segment, beating out gas vehicles. 764 new electric cars were registered in the first five months of the year. During the same period last year, the number was only 123.
[Source: E24]
Posted by Marc Geller at 1:55 PM 1 comment:

From Scooters to High Speed Rail, China is Electrifying

I’m sure I’m not the first to say it. China is electrifying.

When I was studying China and Mandarin Chinese 35 years ago, “Red” China was unrecognized by the US, literally, and dark in a way difficult to imagine now. Who knew what was going on over there? Was “reality” that the world’s oldest civilization was throwing off the shackles of Western domination and its own past to offer a new vision of civilization, or was it bodies floating downriver to Hong Kong during the Cultural Revolution? 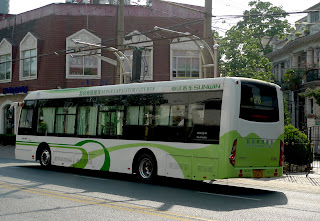 Just as today we can look at a nighttime satellite image and see the black void that is recalcitrant, unelectrified North Korea, once that was China. Today China is as illuminated as the rest of the world, and they are carrying electrification further. I can’t cite the government decree, but having just returned from two weeks that took me from Beijing to Changsha, Hunan to Shanghai, it is evident that a national transportation system is being implemented, and electrification is at its core. From two-wheeled scooters, a mainstay of urban mobility, and urban mass transit, to high-speed inter-urban rail, China will soon see the day most people move about most of the time on electricity. Fifteen years ago Shanghai was a city of diesel busses and bicycles. It had few private cars. For a while, gas scooters held sway piled high with people and products. It had no subway system. Today Shanghai has the world’s largest. Smoother and quieter than any I’ve ridden anywhere. And three types of electric busses - legacy trolleys with catenary wires, battery busses, and super capacitor busses. And most of

the scooters are now electric. (And they are headed directly at you, at night, with no headlight.) 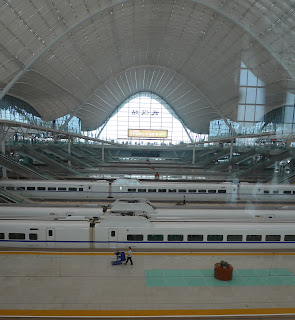 Not very many years ago, tens of millions of Chinese packed themselves regularly into unairconditioned, slat-seatted box cars to get to work and visit family during holidays, enduring trips of more than 24 hours. I’m sure there are still plenty of old-school trains about, but today Chinese are boarding comfortable, high speed electric trains coursing on unimpeded raised trackbeds at over 200 MPH between cities large and ever-larger. Last year it took 24 h

ours to go from Beijing to Guangjou. Next year it will take 6 or 7.

With these dedicated high speed electric rail lines crisscrossing the nation, and the huge, attractive new train stations being opened to serve these inter-urban lines, it becomes clear China has decided most long distance passenger travel will be by electric trains. And these trains are being integrated with existing and new subway systems. Step off one system right onto the other.

Cars will undoubtedly be the last piece of the electric transportation matrix in China. The week I was in Shanghai, the Electric Vehicle Test Drive Center opened to the public in Shanghai Automobile City, a far suburb still reachable by subway. Plug-in cars from a half dozen Chinese automakers were on display along with charge stations in an attractive setting amidst a winding course for test drives. The BYD plug-in hybrid I drove performed well. I have no doubt we will see Chinese brands in the US when they are ready to make a move. While I think selling gasoline cars by the tens of millions to the domestic market is perceived to be of prime economic importance, I hope they choose to forgo following the Japanese and Korean model of aggressively competing on the low end in the export market. We really don’t need more cheap gas cars. With some attention to fit and finish, the Chinese could use their low-cost advantages (labor and a huge battery industry) in a market segment that sells at a premium outside their borders. Once EVs are cool in the West, the Chinese domestic market will follow. 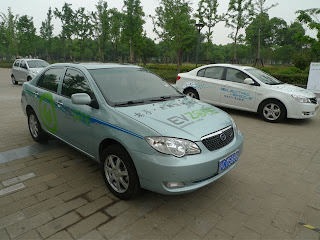 China is very much a work in progress. As progressive and foresighted as they seem to be on the transportation front, they’ve got huge challenges ahead regarding electricity production. Largely dependent on domestic coal, cities are smothered in smog. Beijing, which systematically restricts automobile usage and moved a lot of factories out of town for the Olympics, had clearer skies than I expected. But it is an anomaly. Shanghai and Wuhan are enshrouded in poison.

Factories, including a solar panel plant I know of, have had to curtail production because coal can’t be shipped fast enough to supply electricity generation plants. Transportation of freight, including coal, will be relieved by moving passengers off the freight path and on to the growing high speed rail network. But that only postpones the reckoning that will come with the growing power demands of a burgeoning consumer culture.

We, in contrast, may end up with an efficient, relatively clean, partially renewable electrical grid, while still burdened with a transportation “system” dependent on trucking freight and moving passengers on petroleum.

Interesting piece by Katie Fehrenbacher about Tesla and the period of limited revenue that approaches. "...this latest funding underscores how Tesla will be transitioning into a period where the company will be generating a lot less revenue for several months — hence part of the reason it needs to raise more funds now."
Fehrenbacher had thought components sales might provide a backstop until the Model S appears, but points to the recent S-1 filing. "Tesla doesn’t have any signed agreements for powertrain component sales after 2011." As interesting for what it says about Toyota. There's no evidence yet of a deal beyond 2011 regarding the heralded, new RAV4 EV. And Daimler is committed to German batteries going forward for Smart and Mercedes, and has a deal with BYD for China.
Tesla has weathered dry spells before with Elon Musk's money, as it appears will be the case again.
[Source: GigaOM)
Posted by Marc Geller at 7:49 PM No comments:

The Independent reports four workers at the Chevron refinery in Wales were killed yesterday in what is being described as a "tragic industrial accident"....
Billowing black smoke gushed from the refinery and spread across the sky in what some have described as a "mushroom cloud"....
Posted by Marc Geller at 7:11 AM No comments: