My Trial LEAF & the trials of public charging 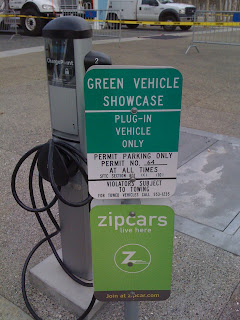 I've got a LEAF for a few days. Very exciting. I'll have a full report soon. But I've got to mention one frustration I've encountered. Restricted charge stations.

In San Francisco at this moment there are, I believe, six deployed new J1772 charge stations. One, a ParkPod unit in the Hilton parking lot, was installed with private funds. Two are at a private parking garage on the Embarcadero, paid for with federal and state money via Coulomb's ChargePointAmerica grants. And three streetside at City Hall, trumpeted in signage as a "Green Vehicle Showcase."

Usage at the City Hall location is restricted; only official city and ZipCar plug-in vehicles may use them. All others subject to ticketing and towing.

Ironically, in practice this means only the converted plug-in Priuses in government and ZipCar fleets, using the 120 Volt receptacle in these Coulomb ChargePoint stations, can park and charge. The LEAF I've got for a few days, which could plug in at Level 2 and be showcased, remains underground out of site while I sit on a jury a block away. And I could use the charge, as I'm charging at 120 volts at home. And, adding insult to injury, two of the three spaces with chargepoints were open when I went to court, during lunch, and when I departed. The third, occupied by a BAAQMD plug-in Prius, appears not to have gone anywhere, long ago charged to full.

The point isn't my convenience while doing jury duty. Ordinarily, I'd take the bus. It's about optimally utilizing the public investment in charging infrastructure. San Francisco spent tens of thousands of dollars installing these charge stations. Mayor Newsom trumpeted their arrival, and Coulomb uses them in its self-promotion. They are serving everyone's interest save the public.

The day has finally arrived when they could be used as intended, for opportunity charging and to showcase the arrival of electric vehicles. Bureaucratic obstacles must be overcome, at least during the first year or two, to maximize the public benefit of this investment. Empty spots and/or restricted access does not serve the interest of the drivers, nor in reality, of the infrastructure providers or government trying to educate the public about electric vehicles.
Posted by Marc Geller at 12:31 PM

And why is the charging prohibited? I thought it should be controlled just like normal fuel. And if normal fuel is available to everyone, why not the plug-ins?

How inconvenient to have an EV back then only you have almost next to none option of charging in public.