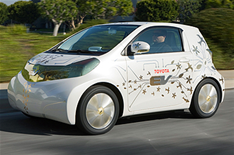 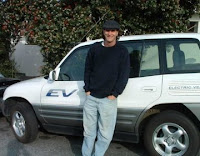 Toyota has a go-slow policy on plug-in electrics. Despite having produced the RAV4 EV - the most useful, robust, and long-lived electric car - Toyota wants to milk its non-grid connected hybrid technology as long as possible before moving on to the next big thing. Ontario has announced a $10,000 rebate for plug-in electrics, and Toyota wouldn't benefit as they delay general release of their own plug-ins. Crying foul, they claim the rebate is back-door support for GM's Volt. Of course, Nissan and Mitsubishi, which have announced plug-in electric cars, will also be able to take advantage.

Toyota was all for policies that benefited its hybrids in California to the exclusion of most other car companies when they got the California legislature to limit HOV access to hybrids that achieve 45 mpg.

Toyota should stop whining and delaying. Were it to release a plug-in hybrid or electric car, it too could benefit from the forward-looking policies Ontario has enacted.

What’s up with the BMW MINI E?

The BMW Mini E has hit the streets. Barely one year ago, word surfaced that an electric Mini was in the works. In June about 500 cars were placed in consumer and fleet hands in Los Angeles and New York and New Jersey for what BMW calls a "field trial."

Like all the automakers, BMW dabbled in concept electric cars over the years. They produced a small fleet for the Munich Olympics in 1972. Although BMW didn’t sell enough cars in California to be obligated under the Zero Emission Vehicle mandate during the ‘90s, during the past few years it was clear the German automaker would cross the threshold. While its competitors, including Mercedes, were united in their promotion of gaseous hydrogen fuel cell vehicles, BMW developed a liquid hydrogen internal combustion program. You’ve probably heard of it, the Hydrogen 7. Based on the $75,000 – 125,000 7 Series, this million dollar mechanical marvel was advertised as “ready for the world when the world is ready.” More money was probably spent advertising the car than went into the electric Mini program. (see the ad here.) Part of a green full court press has included placing the car with celebrities for a short while. Their stories have appeared in the autobloggreen.com website. The VIP treatment includes, I’ve heard, the rather un-green diesel flat-bedding of the cars overnight for refueling.

Why, if millions are being poured into a few dozen Hydrogen ICE cars and their promotion, should BMW rather suddenly decide to produce 500 electric Minis? The answer lies back with California’s ZEV mandate. The simplicity of the original mandate, a percentage of zero tailpipe emission cars, is long dead and buried. The rules and regulations now are byzantine, a kludge upon a patchwork altered every few years. BMW found that the quickest and cheapest way to get the credits that it will need to accumulate is, of course, to build electric cars. And they found a way to game the system as so many automakers have done before. BMW would get the biggest bang for the buck by placing electric cars by June 30, so there has been a mad scramble to get the last cars out the door as I type. The ZEV program shouldn’t be doling out credits for cars on the road for merely one year. CARB was scammed when the EV-1s were destroyed after a few years. This time they actually got notice of the carmaker's intention. It is past the time for R & D for electric cars. The ZEV program is meant to commercialize ZEVs. As with the NEV fiasco, credit-building schemes are taking precedence over production zero emission vehicles on the road. The complexities of the ZEV program have been counterproductive. BMW is playing by the rules, and one can't blame the corporation for doing what corporations do. It's the rules that stink. Join Plug In America's call on CARB to close the loophole that allows full credit for part-time electric cars here.

Of course, that an electric vehicle program of this size could be slapped together in a year to 18 months is simply more evidence that EVs are ready for prime time. BMW turned to AC PropuIsion for the best electric drive components on the market. The car is essentially a high-end conversion. As with many conversions, space is sacrificed for the battery box. In the case of the electric Mini, that means no backseat. In all regards save the placement of the batteries, the car is certainly good enough to put into production. As with the RAV4 EV, this isn’t the best platform for an EV – it’s too heavy and could be more aerodynamic. But once again we’ve got a 100+ mile range EV that could compete in the market. I drove the car from LA to San Francisco recently. It’s fun and peppy, a sweet ride.

While one has got to celebrate another 500 EVs on the road, even temporarily, the way BMW handled the program and its consumer “pioneers” makes one doubt BMW has any intention of launching a real EV program any time soon. Delivery of vehicles was delayed about 6 months and many cars are being delivered without the appropriate chargers or cordsets. The Mini E team was said to have little familiarity with electric cars, and the enthusiastic dealer sales people had their energy challenged by consumers’ frustrated eagerness and corporate indifference. Pioneers’ inquiries about the applicability of the federal $7500 tax credit continue to be stonewalled. Accountants have suggested BMW could transfer the tax credit, which would have the effect of bringing down the steep $850/month the Mini E is costing its “pioneers.” One logical explanation has these vehicles qualifying for a federal R & D credit permitting them to deduct the full cost of the cars and therefore not eligible for the $7500 tax credit only Tesla purchasers can today use. Only BMW knows and they’re not saying.

As BMW was hustling to get the cars on the road by the June 30th deadline, placing increasing numbers with fleets for a mere $10 a month, at least one enthusiastic “pioneer” was turned away less than 24 hours before he was scheduled to pick up his car. Jeff U’Ren drove a Panasonic Lead Acid EV-1 for a few years. After having that car snatched back and destroyed, he was anxious to get back in an EV. After passing the detailed and time-consuming screening for potential drivers, once again he’d be getting a 100 mile range 2 seater. But his repeated inquiries about the $7500 tax credit and general outspokenness on behalf of the prospective “pioneers” on the Mini E Facebook page seem to have caused BMW corporate to reconsider his “suitability” to participate in the program.

Almost bizarrely, the day after Mr. U’Ren was told not to go to the dealer to pick up his assigned car, and long before any data has been accumulated from the EV test fleet, BMW announced it would launch the BMW City in 2012, a 3-door hatchback pure electric car with 100 mile range. As reported in Car & Driver “According to BMW chairman and CEO Norbert Reithofer, the City is designed specifically for the U.S. market to meet California’s Zero-Emission-Vehicle (ZEV) requirements that call for large-volume manufacturers to sell ZEVs by 2012.”
Posted by Marc Geller at 9:18 AM 14 comments: