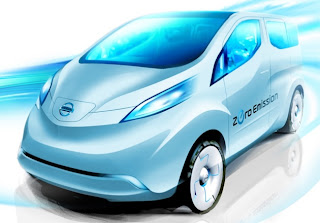 Nissan has released an official sketch of an electric urban delivery vehicle that looks closer to viable than many EV concepts that have appeared at auto shows over the last few months. It is a somewhat stylized take on the NV200 light commercial gasoline van Nissan sells in Japan and Europe.

The press release from Nissan highlights the potential use as an ambulance which could drive directly into a hospital. One time when I took a friend to an emergency room in my Th!nk City I realized hospital emergency areas would be designed differently if EV ambulances existed. How absurd that critical care cases are transported through a plume of toxins between the ambulance and medical attention. Significant moments wasted because the internal combustion vehicle can't drive directly into the hospital.

[Source: AutoBlogGreen.com]
Posted by Marc Geller at 11:12 AM 6 comments: Links to this post