London could soon replace California as the electric car capital of the world. Thanks in large part to Mayor "Red Ken" Livingstone, who enacted London's much criticized congestion charge policy in 2003. 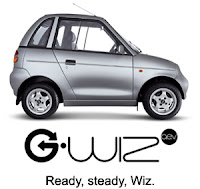 The policy, which exempts electric cars from hefty daily taxation, is resulting in increasingly significant vehicle choices for English consumers. India's Reva was first into the market with the G-Wiz. The French Mega City appeared next from NICE (No Internal Combustion Engine). Sakura Battery Co is offering a line of EVs, including the Italian Maranello4 microcar. Despite being low-speed vehicles about which safety concerns have been raised, they have months long waiting lists. Limited ranged, lead-acid battery based cars, they have nonetheless proven the demand of even less than perfect electric vehicles.

Norway's Th!nk Global views London as a first market when it relaunches the Th!nk City in 2008. ZAP, maker of the 3 wheeled Xebra, "has passed Vehicle and Operator Services Agency

(VOSA) inspection, allowing it to be driven on roads in the United Kingdom," according to recent news reports. Its UK marketing plans are, however, unknown. And Tata Motors, an Indian industrial giant, is "working on an electric version of the Indica for the overseas market, slated to be launched by 2009," according to the Hindu Business Line.

To facilitate these EVs, Charging stations are being put in place by local councils, making even short range electric cars viable for commuters.

And now major automakers appear almost ready to get in on the action. Daimler is set to be the first on the street with 100 test vehicle SMARTs in 2008. Mitsubishi could be the first with cars for sale if the UK distributor has its way.

Daimler Smart ForTwo electric trials are set to begin in London, according to the Financial Times. Corporate and public-sector fleets will get to lease 100 test cars for a pilot period of four years. Yet Daimler's intention is more ambitious.

If the tests turn out as Daimler hopes, the company plans to begin commercial production in 2010, before the end of the pilot. “We want to test it and get it into production,” Mr [Anders] Jensen, head of the Smart brand team, told the Financial Times on Wednesday......The brand chose London for the pilot in part because of its network of free public recharging stations.

The first cars will utilize NiMH batteries, as do the Toyota test platform Plug-in Priuses at the University of California. From where I sit (in the driver's seat of a NiMH powered Toyota RAV4 EV) this seems eminently practical. Sacrificing some of the energy density and range in Lithium for the robust proven long-life and reliability of Nickel batteries makes tremendous sense. Hopefully GM's and others' gamble on Lithium in the first rendition of their new EVs will prove correct, but getting trouble free cars on the road quickly is what we need. NiMH is the risk-free pathway.

Mitsubishi's i-MIEV, an electric city car (using Lithium) about which much has been written (see EVWorlds report from Tokyo,) is meant to go into production in Japan for Japan in 2009. According to Autocar.co.uk, "the firm’s British importer is currently lobbying hard to add the car to its UK product portfolio as early as possible." The i-MIEV would make available for the first time in the UK a full-function, highway-capable electric car, if still very small by American standards. It is projected to cost between £15,000 and £20,000, a pricey $30-40,000 at today's weak dollar. Still I suspect there would be greater demand than initial supply. There is a market for cool and clean at the low and high end.