A large survey, 4000 people in eight countries, has discovered what many of us have been saying all along. There is an existing market for electric vehicles, especially among those who can afford the extra cost of limited-production new technology vehicles. The only problem? There are no cars for sale. A Business Week blog reports on the survey by the Munich based consultants Bain & Co.

“Consumers would be buying now if there were products,” says Gregor Matthies, a Munich-based partner at Bain who specializes in the auto industry.

For years BMW disparaged electric cars, and poured money into liquid hydrogen ICE vehicles and promoted them ad nauseum. I drove one of those, and although luxurious (it's a $100,000 7-series before the hydrogen,) it was lumbering and slower off the line than my RAV4 EV.

Yet it took BMW less than one year to make an electric car. A friend called me while behind the wheel of the MINI E last night and it is, not surprisingly, a hoot to drive. After the onslaught of advertising for the doomed Hydrogen 7, we've yet to see much in the way of promotion for the eminently buildable and marketable electric MINI. Is this limited, one year, lease-only release testing the waters? Or merely a way to meet ZEV mandate obligations?
Posted by Marc Geller at 10:54 PM No comments: Links to this post

As a part of the new government economic stimulus plan, Norway will be getting a "forest" of charging stations for electric vehicles. The Scandinavian nation, which is home to Th!nk, today has about 2500 EVs on the road. The plan is to quickly install 5000 charge points, reports Richard, the founder of the website Electricaid. Electricaid was created late last year to explore ways to help save Th!nk. The site has quickly grown to hundreds of members worldwide.

An infrastructure development proposal such as this would be most welcome here in the US. The short-term stimulative effect of preparing America's cities, highways and byways with wiring, hiring electricians and other workers, would be significant. And it would leave the country ready to receive the cars that will help us achieve our greenhouse gas reduction goals.
Posted by Marc Geller at 7:43 AM 6 comments: Links to this post

...the centerpiece of Monday’s East Room announcement is Mr. Obama’s directive to the Environmental Protection Agency to immediately begin work on granting the so-called California waiver, which allows the state, a longtime leader in air quality matters, to set its own standards for automobile emissions.

Posted by Marc Geller at 4:46 PM No comments: Links to this post


Survivors Of Gas Station Explosion Mourn Tragic Loss Of Gasoline
Posted by Marc Geller at 11:03 AM No comments: Links to this post

Gore's group on board with plug-ins

The Alliance for Climate Protection, Al Gore's group, has taken another step toward promoting plug-in cars (all electric cars and plug-in hybrids) with its RePower America campaign. They've got the budget to really move the national conversation about the future of cars away from the well-funded distractions of hydrogen, fuel cells, natural gas and ethanol. Let's hope Al Gore's been saying as much to President Obama (doesn't that sound great!)

Posted by Marc Geller at 4:07 PM 4 comments: Links to this post

Electric Cars - Yes We Can! 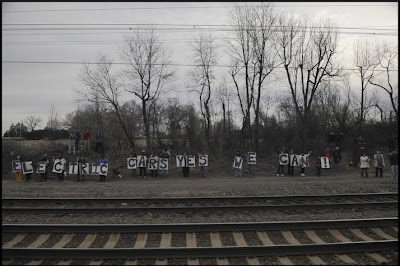 East Coast - Along the route President-elect Obama rode on his way to DC, electric car activists spell it out. 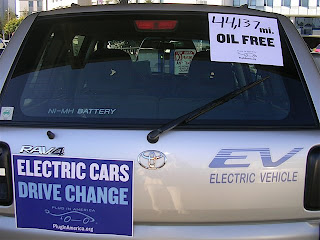 West Coast - 75 electric vehicles paraded through the streets of Santa Monica in a pre-Inaugural Parade with a message for the President-elect. 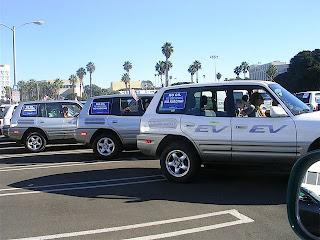 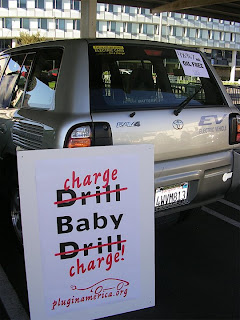 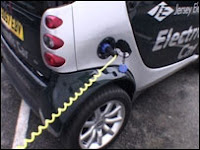 Tesla will be producing battery packs for Daimler's electric Smart, reports Ken Basinger in the LA Times blog Up to Speed. One thousand packs will be delivered this year and next. This would mean returning to a business Tesla had previously considered but abandoned. In 2007 Tesla pulled out of an agreement with Th!nk to produce batteries for the new Th!nk City.

Hopefully we'll see some of these SmartEDs in the US soon. Daimler needlessly procrastinated on bringing the gasoline Smart Car to the US. Tens of thousands of sales later, last I heard there are still waiting lists. The electric Smart is eligible today for $7500 in federal tax credits. Why wait?
Posted by Marc Geller at 12:35 PM 1 comment: Links to this post

The financial crisis that shut down Th!nk's factory appears to have ended, according to Reuters. The Ener1 Group, the main shareholder of the battery producer with which Th!nk had placed a large lithium battery order, has made a $5.69 million loan.
Posted by Marc Geller at 11:55 AM 1 comment: Links to this post

Toyota will be showing a battery electric car - the 50 miles range FT-EV - in Detroit. But before you get too excited, Irv Miller, Group Vice President - Environmental and External Affairs, has some words of caution in his blog.

"It’s important to note that at this point the FT-EV remains strictly a concept."

Lest we forget, ten years ago Toyota produced the 100+ miles range RAV4 EV. And most of them are still on the road. For the record, mine currently has 65,000 miles on the original battery pack and still gets over 100 miles per charge.

The tragedy is that Toyota could put plug-in cars in showrooms today, but they refuse to be first. Rest assured, they won't be last.
Posted by Marc Geller at 5:25 PM 7 comments: Links to this post

Occasionally a RAV4 EV sells used on the open market. Yesterday one sold at auction for $32,600. Why so low, some bloggers are asking? Why so high is the real question. $32K is about what the original purchaser paid back in 2003, after the $9000 rebate then in effect in California. Is there another car that has so retained it's value?
Posted by Marc Geller at 11:36 AM 2 comments: Links to this post

More Japan/France cooperation on the EV front. Mitsubishi will be supplying electric cars to French automaker Peugeot, as reported in Forbes. Mitsubishi's stock rose 6.5% on the news on a down day in Tokyo.
Posted by Marc Geller at 6:34 PM 1 comment: Links to this post