Stefano Paris, plug-in car and renewable energy supporter and renaissance man, has made a video of Plug In America's rally in Sacramento outside CARB last month. Check out the video, and his extremely useful website on plug-ins here.

The UC Davis Institute he heads took in millions from auto and oil companies in the years prior to his appointment by Gov Schwarzenegger. At last month's Board Meet, Sperling spearheaded a proposal to cut the number of zero emission vehicles required by the ZEV program. Spirling has been a major proponent, along with the automakers and oil companies, of shifting the program's emphasis from near-term battery electric cars to decades-away hydrogen fuel cell vehicles. A one-time supporter of electric cars, he says in the article,

"I lost funding [for the institute] from the Detroit car companies for many years, and I realized I should not be taking those policy positions unless it was really well-grounded," he said.

Check out my snarky AutoblogGreen.com post on Lexus' greenwashing. Quoting myself,

Lexus is taking hybrid hype to the next level, the penthouse.....At one time Toyota was content to let the Prius subliminally lower consumers' green expectations from electric cars to hybrids which use gasoline-generated electricity to raise efficiency. Lexus has gone literal - "h" is the new green lifestyle. Instead of actually manufacturing and marketing the greenest vehicles Toyota has already proven they could produce....

The following guest blog post is by Earl Killian who often blogs at Joe Romm's ClimateProgress.org . Biographical information below the post.

Imagine for a moment that the world had rejected wind and solar energy, and instead decided to wait for a hydrogen fusion research program to reach fruition. Where would we be today? Fortunately for the world, wind and solar are growing rapidly, while hydrogen fusion research remains speculative at best. But when it comes to cars, the hydrogen kool-aid seems to be working and putting research before solutions.

Roland Hwang is an NRDC policy analyst working on transportation energy issues. In his blog he writes:

Originally conceived of in 1990, the California ZEV program has morphed over time from just an electric car mandate to incorporate a broad spectrum of clean, advanced technology vehicles, such as hybrids. 2008 required another tune up based on the opinion of the Air Board’s own independent technology review panel which said that fuel cells cars are not ready for mass commercialization.

There’s a contradiction in those two sentences. If the ZEV program is a “broad spectrum of clean, advanced technology vehicles,” then why does it need a “tune up” because “fuel cell cars are not ready for mass commercialization”? The answer is that the ZEV program has in reality bcome a hydrogen fuel cell research program, apparently even in the mind of the NRDC. And to make his point Hwang stretched the original goal of 8,333 ZEVs per year into “mass commercialization.” Hwang went on to write,

That is, they reduced the fuel cell requirement by 17,500 cars, but strengthened the program by requiring 58,000 plug-in hybrids.

That sounds good, but he never discusses the possibility, so often found in the pre-meeting comments submitted, of getting the plug-in hybrid numbers by taking the dirtiest cars off the road instead of the cleanest ones. At the very least, CARB could have converted their hybrid requirements into a plug-in hybrid requirement, instead of taking from the small ZEV numbers.

Hwang also never considers whether CARB is leading or following the market on plug-in hybrids. If it is following, then it is simply giving the automakers credit for something that plan to do otherwise.

CARB’s reduction in ZEV deployment guarantees that the automakers will spin the tiny number of ZEVs now required as being “uneconomic”. By the estimates presented at the meeting, 1,667 additional vehicles per year will cost the automakers and additional $147 million, so they expect them to lose $88,200 per FCV. BEVs in contrast could be sold at a profit.

Why does the NRDC ignore Battery Electric Vehicles (BEVs) and pretend that only hydrogen fuel cell vehicles can satisfy a ZEV goal? One would expect the NRDC to understand that hydrogen Fuel Cell Vehicles (FCVs), even if the research someday reaches fruition (fuel cells have both lifetime and cost issues in the foreseeable future), make it two to four times harder to solve our greenhouse gas emissions problem, and can do so only by using up unnecessary wildlife habitat.

If the hydrogen for FCVs comes from steam reformation of methane (11,888 g CO2e/kgH2), then greenhouse gas emissions per mile for a 50 mi/kgH2 vehicle are 238 g/mi. The 2008 Toyota Prius is 242 g/mi today. If FCVs are to be better than a Prius, the hydrogen must be produced from renewable energy.

California’s own Hydrogen Highway Blueprint Plan estimates that hydrogen FCVs will require more than 4000 BTU/mi (1172 Watt hours per mile) of renewable energy. Even a boxy SUV built with decade old technology (the Toyota RAV4-EV) uses only 302 Wh/mi, according to the EPA’s Fuel Economy website. If powered by renewable wind and solar, extra Watt hours translate into extra land use for solar and wind farms. FCVs will therefore be wasteful of land and our renewable electricity investments. But FCVs are still in research, and perhaps the final result will be more efficient than California’s blueprint allows? Let us look at what might be possible if FCVs achieve all of the aggressive goals set for them.

Because a FCV is essentially a BEV where some (but not all) of the batteries/capacitors have been replaced by a hydrogen tank and a fuel cell, and the plug is optional (but probably desirable), it is straightforward to compare the vehicles. Use an identical 260 Wh/mi for motor to wheels efficiency. For a BEV, this gives 300 Wh/mi at the garage plug (as seen on the RAV4-EV). The DOE’s FreedomCar’s goal for fuel cells at their peak efficiency is 20kWh of electrical output per kilogram of hydrogen fed into it. Thus to power the wheels one mile we need 13g of hydrogen (or 77 mi/kg). FreedomCar’s goal is still a ways off (most similar sized FCVs are less than 50 mi/kg). Next, according to NREL, “An efficiency goal for electrolyzers in the future has been reported to be in the 50 kWh/kg range, or a system efficiency of 78%.” Thus 13 g/mi of hydrogen to operate a FCV of the future requires 650 Wh/mi of renewable electricity. This is better than the 1172 Wh/mi in the Hydrogen Highway Blueprint Plan, but still a factor of two higher than the BEV requirement. Wouldn’t this additional land be better used toward solving our electricity greenhouse gas emissions, instead of wasting it on inefficient FCVs?

Earl Killian is a software engineer and microprocessor architect who is also passionate about finding solutions to the global warming crisis confronting us. He graduated from MIT in 1978 (B.S. Electrical Engineering and Computer Science), and has most recently worked for MIPS, QED, SGI, and Tensilica, all silicon valley companies engaged in creating microprocessor products. He was a co-founder and CTO of QED, and held the title Director of Architecture at each of the other companies. His microprocessor work has resulted in 23 patents issued so far. Earl Killian and his wife drive two battery electric vehicles, fueled by sunlight from the photovoltaic panels on their home.
Posted by Marc Geller at 3:13 PM 7 comments: 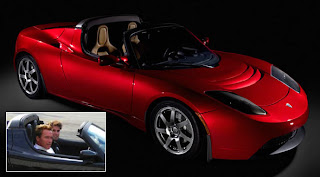 Sandia Labs Researcher Ben Cipiti has penned a short piece entitled An Unbiased Approach to Evaluating Transportation Fuels in which he extols the virtues of plug-in cars to meet our environmental and national security goals. He correctly identifies the problem bedeviling consumers, policy makers and, perhaps, auto makers.

Many of us want to know what we can do to make a difference. Yet with so much varying information about energy alternatives, it has become difficult to choose which technologies really make sense and which will be a waste of research dollars.

He briefly recaps the problems with ethanol and hydrogen and concludes:

Of the alternative transportation options, electric vehicles coupled with increased use of renewables and other clean sources of energy will be the most efficient way to reduce pollution and eliminate dependence on foreign oil. We need to look at all of the issues to concentrate funding on the solutions that make sense.

Read the entire article here.
Posted by Marc Geller at 11:43 AM 4 comments: