The deck of cards, some might say house of cards, that is the American economy is being shuffled. A generation of deregulation has culminated with free-market ideologues and corporate chieftains begging for salvation from the federal government once-despised as mettlesome.

Billions to bailout financial giants has been followed by a plea from the one-time Big Three. Hoping the broader crisis would provide cover for the effects of years of bad management and undesirable product, the over-compensated execs from Detroit flew in separate private jets to DC seeking a handout. As one commentator put it, it was as if three men in top hats and tails sat down to feast at a soup kitchen.

None can deny the importance of the auto industry to the American economy, but no one was in the mood to pay obeisance to the once-powerful supplicants. Bankruptcy itself seems to be on the table. Wagoner, Nardelli and Mullaly sat down to find Republicans sensing an opportunity to kill off the unions, and progressives willing to let it happen to bitch-slap the high-flying execs. Many would like to see a bailout with strings to drive retooling for plug-in cars. Plug In America is making it easy to let your Congressional representatives know how you feel at www.pluginamerica.org.

But some relief from November's economic doom and gloom could be seen in the string of announcements that suggest plug-in cars are truly coming to market within the next few years. GM went on the air with advertisements for the Volt, a full two years before it's release date. Some see greenwashing, some a continuing commitment to electrics in troubling times.

In early 2009 BMW will put 500 electric Minis (using an AC Propulsion drive system) on the road in LA and NY for a one-year lease-only trial reminiscent of the ZEV mandate era cars in California that were ultimately crushed. Only time will tell if this is a one-off to meet regulatory obligations or a new direction for the German automaker that’s been pursuing the lonely road of liquid hydrogen.

Nissan/Renault is clearly in the forefront, pursuing plug-ins globally. Chairman Carlos Ghosn has gone further than any auto exec in making an alternative fuel choice for the future and it is unambiguously battery electric cars. Commitments have been made for tens of thousands of cars within a few short years for Israel and Denmark in cooperation with Shai Agassi's Better Place. At the LA Auto Show Ghosn and Governor Ted Kulongoski announced an agreement that will make Oregon the first state to see Nissan electric cars, beginning in 2010. Portland's electric utility has already begun installing charging insfrastructure. Nissan foresees full-scale marketing of EVs in 2012.

The San Francisco Bay Area is also making a play to become, in Mayor Gavin Newsom's words, "the electric vehicle capitol of America." The mayors of the region's three largest cities announced, along with Better Place, a move to aggressively promote plug-in cars.

The recent halving of gasoline prices poses a challenge. With the global economic downturn, oil may not return to $100 or more a barrel quickly. Many a move toward alternative fuels has died on the shoals of lower petroleum prices. Look for investments in ethanol to slow, and plants to close. But even at $2 a gallon, electricity is competitive, and in the national interest. It is up to us to keep the pressure on Congress and the automakers to find creative ways to bring plug-in vehicles to market quickly.
Posted by Marc Geller at 1:44 PM 3 comments:

Boy, these guys don't make it easy to feel the slightest sympathy for the plight of US automakers. The lineup of CEOs at the Congressional hearings yesterday reminded me of tobacco execs not so long ago denying cigarettes cause cancer. Rick Waggoner had the chutzpah to say their problems are rooted in the credit crisis. A little contrition for bad product and management might have gone some way toward greasing the money chute. Now they've got Republicans craving bankruptcy to kill off the unions, and progressives willing to let it happen to bitch-slap the high flying execs. Not a pretty picture.

At the very least, any bailout ought be tied to retooling for plug-in cars. Plug In America has a simple way to let your Congressional representatives know you want to see "No Bailout Without Strings." Click here to send a letter to your representatives.
Posted by Marc Geller at 10:15 AM 2 comments: 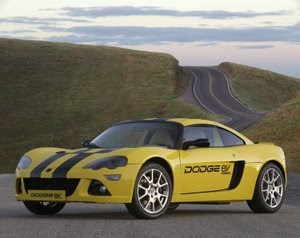 Check out Dan Neil's LA Times blog and view the race.
Posted by Marc Geller at 8:17 AM 8 comments:

Chris Paine, director of Who Killed the Electric Car? and Linda Nicholes, President of Plug In America, took delivery on Wednesday of their Tesla Roadsters. Chris directed filming of the long-awaited event at Tesla's Santa Monica showroom. And, Chris blogs about it at on his Revenge of the Electric Car site. 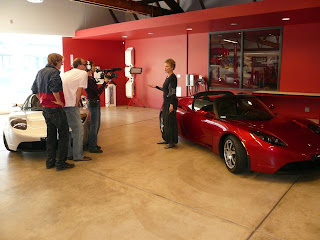 [Thanks to Paul Scott for the photo.]
Posted by Marc Geller at 10:37 AM No comments: