What about the Pickens Plan?

The good news about electricity as a transportation fuel for cars is finally breaking through to the mainstream. GM’s centennial celebration in mid-September saw the unveiling of the production version of the Chevrolet Volt, still scheduled for appearance in showrooms in November 2010. Hundreds of articles were published asking if the Volt can save GM. GM’s bad boy Bob Lutz even appeared on the Colbert Report, to mixed result. (Video embedded below post.) Other automakers are watching closely, with announcements heralding their own electric intentions.

Hydrogen and fuel cells remain decades from meaningful deployment, even their supporters concede. For the foreseeable future, ethanol remains dependent on corn. Meanwhile, in a back to the future moment, T. Boone Pickens is spending tens of millions of dollars promoting CNG (Compressed Natural Gas) as the bridge fuel to get the U.S. off petroleum in the short term. If it were 1976, he would be right.

The Arab oil embargo and price increases of the ‘70s pushed the U.S. away from using petroleum to generate electricity. Today, less than 2% of American electrons are produced with oil. Diverse, American sources of energy have made the electric grid essentially resilient and secure, immune to petroleum’s price volatility or politics.

For reasons political and economic, cars and trucks and busses remained tethered to petroleum. Before greenhouse gasses became a global concern, before we came to terms with the inevitable limits of fossil fuels, natural gas would have been a logical fuel alternative to petroleum. Had national and economic security trumped the power of oil and auto companies, a large percentage of cars would run today on cleaner, cheaper, domestic natural gas. A few billion dollars a week wouldn’t leave the country, and we would all understand the value of choice.

But we find ourselves in 2008. While less polluting than petroleum, burning natural gas emits significant carbon. Natural gas, like petroleum, is not forever. And today natural gas is a critical fuel for electricity generation. And making electricity is simply a more efficient use of this resource. As Joe Romm wrote at his Climate Progress blog:

We currently use natural gas to produce 22% of our electricity.” Most of that electricity comes from gas burned in combined cycle gas turbines at an overall efficiency of up to 60%. Why in the world would the federal government — or anyone else — spend billions and billion of dollars on natural gas fueling stations and natural gas vehicles in order to burn the gas with an efficiency of 15% to 20%? Natural gas is simply too useful and expensive to squander in such a fashion.

Pickens’ plan includes lots of wind-generated electricity, ostensibly to replace the natural gas he would divert to vehicles. One can’t, however, simply replace gas generation with wind. But we can use the electricity generated with each to power plug-in cars.

Pickens plan can be viewed as a logical criticism of Al Gore’s plan for 100% renewable electricity within ten years because it doesn’t do anything about our petroleum dependence. Gore’s group’s TV ads, (almost as ubiquitous as Pickens’,) have recently begun to mention petroleum addiction but still offer no solutions.

To the plethora of petroleum alternatives served up during the past few years – hydrogen, fuel cells, biodiesel, ethanol, electricity - Pickens’ plan resurrects the fuel discarded since 2000 by Ford, GM and Toyota. As if Americans weren’t confused enough already. The truth remains vehicles are electricity’s killer app.

Posted by Marc Geller at 9:00 AM 5 comments: Links to this post 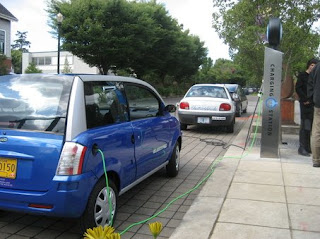 Hat tip to David W.
Posted by Marc Geller at 7:30 AM 3 comments: Links to this post

The NY Times is reporting that Wednesday morning will see the announcement of a deal that will see Tesla's second electric car, the sedan, built in San Jose.

On Wednesday morning, the company will announce a deal to lease 89 acres of land in San Jose, Calif. to build a company headquarters and a 600,000-square-foot plant to produce the battery-powered Model S sedan.

Posted by Marc Geller at 1:41 AM 2 comments: Links to this post