What's up with public charging?

The car landscape of America is changing. Some places have plug-in cars. Some places have public charge stations. Some places are lucky enough to have both.
The USDOE counts over 5500 public charge stations. Only ten states have none.
Is there public charging where you as a EV driver want to find it? How will you find it? Will you be able to simply plug in and charge?  Will you be charged money? How much? And how will you pay?
Pretty basic questions are still being asked, and occasionally answered. But it’s a bit of a crapshoot out there.
Three web and mobile phone apps I’m familiar with make it pretty easy to learn if there is a charge station near where you want to find one.  carstations.com, plugshare.com and recargo.com each offer the basic information you need and some degree of crowdsourcing. Plugshare brings crowdsourcing to the next level with the inclusion of people sharing their own home plugs.
These first thousands of public Level 2 240V J1772-compliant charge locations have often been installed by Ecotality’s EVProject and Coulomb Technology’s ChargePoint America program with significant government assistance. Because of these programs, there are a lot more charging stations out there than would otherwise be. That’s a good thing. But it’s usually not as easy as plugging in your phone. Drivers are having to learn the intricacies of the differing proprietary networks, each with their own access methodology. Many are free for the time being while costs are covered by government grants, but payment is sometimes required, whether by the hour, or kilowatt hour, or session. Prices reported range from $.50 per hour to $7.40 per session.
Many of the host locations are struggling with pricing and unrealistic expectations of a significant financial return. In areas with growing numbers of EVs and public charging, the charge points are often well utilized when free - too well-utilized, perhaps selfishly, in some cases. And quite under-utilized when payment is required.  Drivers know only free beats home charging, unless you need it.
We face a conundrum. For the near future, we want the general public to see cars utilizing charge spots so they can ask us questions and come to envision the future. Down the road, pricing will likely need to be used to ensure charger availability for those who really need it. But charging too much too soon results in empty spaces, resentment, and missed opportunities. 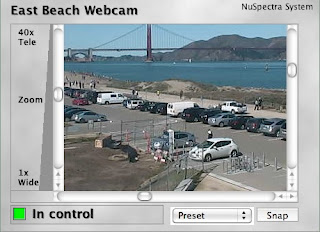 While companies compete to create an industry out of public charging, the non-profit Adopt-a-Charger (adoptacharger.com) offers a different model. (Full disclosure: I’m on the Board of Directors.) No hassle, fee-free sponsored public charging at destination locations. The first installation was inaugurated on February 15 at Crissy Field in the National Park Service Golden Gate National Recreation Area in San Francisco. This will undoubtedly become the most photographed charge station in the country, given a background of wind turbines and the Golden Gate Bridge. This location was sponsored by the National Parks Conservation Association which covered the charge station and installation costs.  As additional sponsors are lined up, more public charge stations will be located within the park, including locations at Muir Woods and Stinson Beach. Contributions will be solicited from supporters to cover the ongoing electrical cost. (You can check it out on the webcam at:
Nissan is sponsoring the next two Adopt-a-Charger locations, at the Los Angeles County Museum of Art and the Music Concourse Parking Garage that serves the DeYoung Museum and Academy of Sciences in Golden Gate Park in San Francisco.
In 2012 it is vitally important to demonstrate the popularity of EVs. Uninhibited access to public charging is good for drivers and good for the general public. By bringing together sponsors - corporate and non-profit - that want to put a stake in the ground for electric cars along with attractions like museums and parks that want to host charge stations, Adopt-a-Charger has found a way to put plug-and-play (not pay) charge stations in useful places.
Posted by Marc Geller at 9:34 AM 15 comments: