I participated in the Governor's Office Conference Coast-to-Coast Workshop on E-Mobility in Sacramento sponsored by the governments of California and the Netherlands on Wednesday.  The biggest impression of the day regarding EVs was made upon me before I even made it to the hotel.

For the past decade I've been driving the 91 miles to Sacramento without stopping to charge in a 2002 RAV4 EV. I suspected I wouldn't find a nearby available old RAV charger. Most have been replaced with units compatible with the new PEVs.  So that day I was driving my LEAF.  Less range but lots more public charging stations and fast-charging available.

I'd scoped out the closest garage with charging stations beforehand and hoped I'd find an available Level 2 charging station.  The three in that garage were occupied by 8:30am, and I was pleased to see quite a few more PEVs parked in spaces without charging stations. Government workers who likely live close enough to not bother plugging in, I surmised. Or perhaps they just got beat out that morning and would have plugged in if the charge points were available since they are cost free. 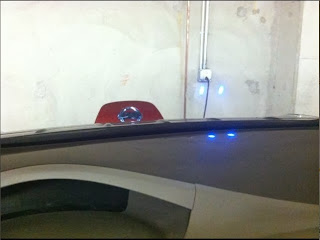 Anyway, no time for idle conjecture; I was due at a meeting soon. I drove up through the 5 story garage hoping there might be some more charge stations elsewhere. There weren't. But what I did see, including on upper levels with few cars at all, were PEVs scattered throughout plugged in to 120V outlets.  More cars were charging at these unintentional "guerilla" Level 1 charging stations than the "official" (and costly) Level 2 stations. What lessons are we to learn?

Some might say, given the number of plug-in cars showing up in that garage, that it's time for more Level 2 chargers. I don't think so. Maybe some day, but not now. We have one mission: getting more consumers to buy plug-in cars. In Norway tax policy has resulted in the the world's quickest uptake of EVs. In October, more LEAFs were sold in Norway than any other model, gas cars included. We need to find other means to the same end. The Real World demonstrates that what's most useful and cost effective is more access to 120V outlets, perhaps lots more, at America's workplaces. It's simple and affordable by America's small and medium sized employers.  And it's more than most drivers "need," actually.

Britta Gross of GM is reporting 70% of Volt customers charge at 120V. Nissan was surprised at the number of buyers uninterested in Level 2 at home, but we don't have real data.  Nissan and the others ought to be required to reveal more data on how cars are charging. Relying on EVSPs gives us wildly skewed data that does not include Level 1 or EVSE-less Level 2. We already know that the real world charging experience is not exactly what was predicted and planned for. We need good information from the 10s of thousands of EVs on the road to help us make smart infrastructure decisions.

Where outlets exist already, as in that Sacramento garage, they need to be checked for safety and repurposed for EVs. It's the least expensive way to create a charge point and arguably the most powerful single carrot available to turn commuters into EV commuters and employers into willing accomplices. New Level 1 installations - outlets - will be the least expensive, lowest maintenance option - no EVSE.  And they can be made Level 2 ready with proper wiring and conduit for the day five or ten years hence when EVs can partake of all the the "grid smarts" envisioned.

Later at the meeting I was told about what's happening at CalEPA. There are at least 28 Level 2 chargers in garages within one block of CalEPA, possibly many more. Yet there are so many PEV drivers now they've got a system to facilitate communication amongst themselves to enable the daily shuffle of cars to chargers during work so everyone can avail themselves of the free charge. Is that grass-rootsy EV driver success to apportion charge opportunities fairly? Or is it failure, taking state employees away from work, costing the state still more in the name of advancing plug-in vehicles?  Is it reasonable to expect private employers to tolerate such a situation to promote EVs? 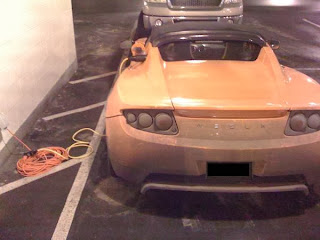 Back in the garage, I didn't find an available outlet.  In the end I went to the hotel, which doesn't have any official EVSE but PlugShare reports does have a 240V outlet for EVs. So I pulled in, found the outlet, plugged in my EVSEupgrade.com unit, and charged up.

The meeting was informative.  Clever financing, electric public transport, and "interoperability" are important issues and a lot is gained from cross-national conversations. But right now Job One is increasing PEV sales.  We ought to spend more time considering what will actually drive sales in the next year or two. "Interoperability," once we decide what we are talking about, and "smart" charging capable of providing grid services some day, will not sell one PEV now.

A 120V outlet with a welcome matt at one's workplace will. Surely there's a way to make that a priority.

I think it was a big mistake that we let "range anxiety" sneak into our lexicon. I never have that.

But sometimes I do have "charger anxiety" when I fear that all the chargers will be occupied when I get the place I plan to charge.

Of course more level 2 chargers will be welcome, but your initiative for level 1 availability will yield results faster and cheaper.

Interesting post. I wonder how electric cars will fair in the future...i love seeing more and more developments in this industry

Really the electric cars are awesome. Here, i agree with your points such as, GM is reporting 70% of Volt customers charge at 120V. Nissan was surprised at the number of buyers not interest to charge level 2. But level 2 charge is most appreciatable. The most electric Popular Cars to Buy has level 2 charge.

good posting, thanks for this ! :)

this blog is very nice and good, i found it today, but looks so cool! Thanks!

really useful article, thank you for sharing!
Website invites you to visit: http://www.furniturebt.com

Thanks for the post.Michelin Tyre are one of the best brands of tyres in the market.If anyone searching for Michelin tyres Pune then go for Shree Tyres.For more detail contact 8055678063.

really useful article, thank you for sharing!
Website invites you to visit icc champion trophy 2017All match live updates on a single click.

It is very interesting and informative. Thanks for sharing this valuable knowledge..
Places that buy cars
sell junk car
car scrap

Great move for Norway to focus more on EV's and allow only the environment friendly vehicles on their roads. My uncle is one of those who doesn't like the fancy tech of cars, especially EV's. Last time I helped him install the lexani wheels on his Ram diesel truck, he mentioned his experience driving the new Tesla 3 of his in law and he somehow liked it minus the annoying tech. He's a huge diesel guy so it may take some time for his to fully appreciate the EV's.